In November of 2018, LeeTran changed the 590 and 595 Routes from a headway of 60 minutes to a headway of 50 minutes in an attempt to show that "better frequency  means better service."  The Pulse Plan conducted an analysis showing that showed that four out of five times, the Pulse Plan had improved the time for passenger traveling in the Cape Coral - North Fort Myers area even though LeeTran had the North Fort Myers routes running 17% faster!
Simply stated, frequency by itself is not enough.  There has to be a cooperation and a harmony between routes, especially for a small-market transit system such as exists in Lee County.  Lee County cannot afford running buses every 10-15 minutes as in New York City, and practicality demands that one make best use of what one has!
The Pulse Plan has the 590 running on a 60-minute headway, not every  50 minutes, so it can better integrate with the rest of the system.  With ten more minutes added to the route, the 590 is able to service the VA Hospital (along with the 595) every hour.  Apparently, LeeTran must have agreed with the ultimate wisdom in coordinating routes on a 60-minute basis, because in February of 2020 they changed the routes back to the 60-minute headway!  Nevertheless, there are still some quirks in the route, such as the 590 Bus's waiting idly for 25-minutes at Merchant's Crossing before it begins its last run of the evening, and patrons from the VA Clinic having to wait 48 minutes for their connecting ride back to Suncoast Estates, (if they started their trip earlier from there.)
Below is the proposed schedule for the 590 Route, which includes a morning and evening run down Kismet and Diplomat for far-flung patrons who do not have access to public transportation (highlighted in light blue:) 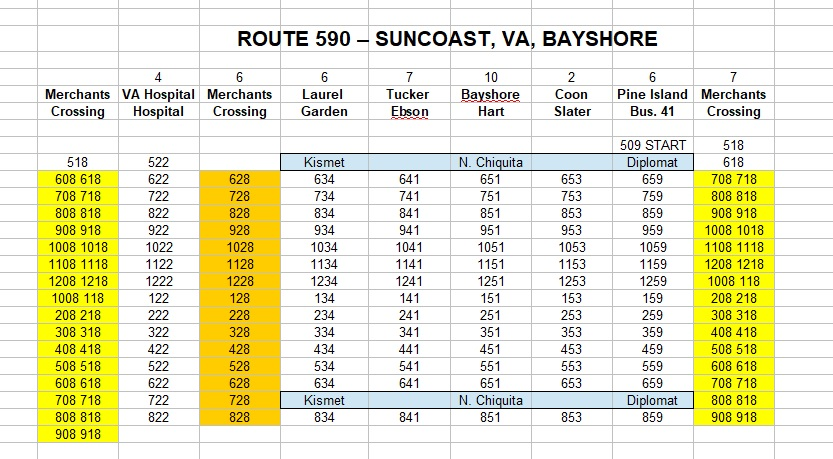 The 590 Extended Route is shown by the dark blue dotted line below. 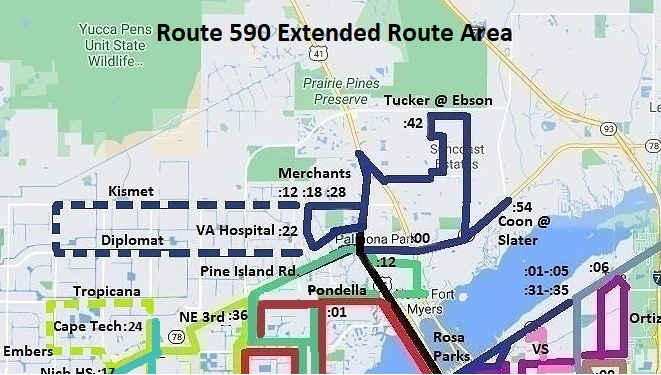 This is how the 590 and 595 interface at Merchant's Crossing with the Pulse Plan: 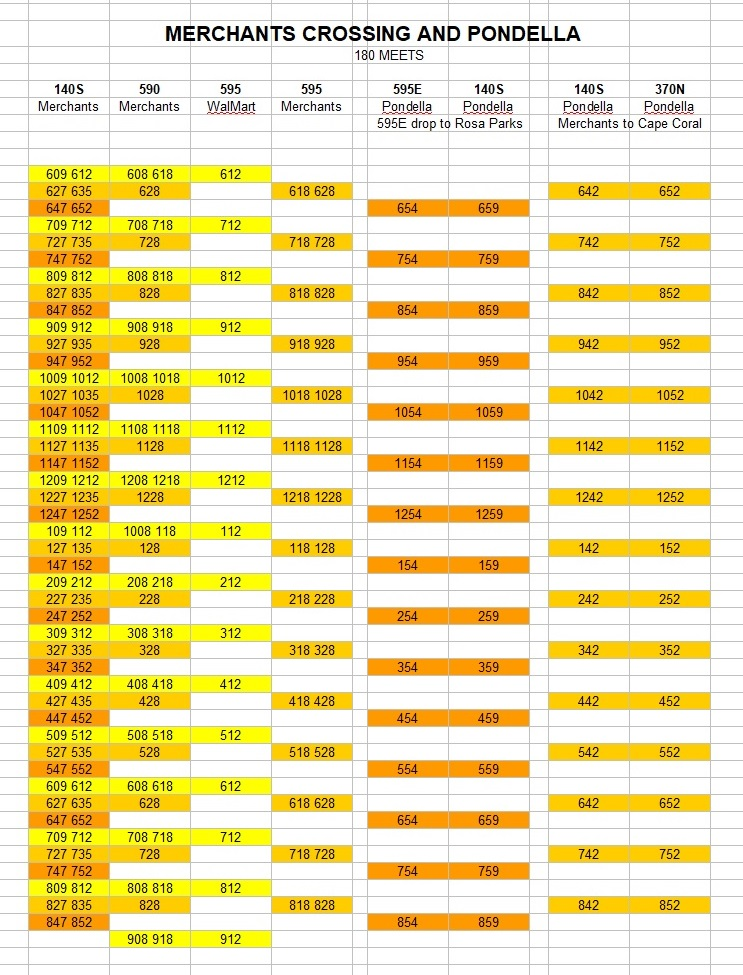 And this is LeeTran's attempt to coordinate meets at Merchants Crossing:

The Pulse Plan has 180 meets at Merchants Crossing (not including Pondella meets.)  Compare this with only 104 meets at Merchants Crossing by LeeTran.  With just a little more effort from LeeTran, citizens in Lee County could have a much better transit system, but it seems that LeeTran just doesn't answer to the people!  It is the citizens of Lee County who have to live with the results of LeeTran's lack of effort and poor planning!
Next ---> 595 Route