RECOMMENDATIONS
This page is an overview where the major ideas of the Pulse Plan could be accessed all at once and in an easy way.  Compare our recommendations for improving LeeTran with LeeTran's and Tindale-Oliver's (Transit Consultants) own recommendations to enhance the trunk and feeder system and to increase frequency and buses (at a cost of many millions of dollars.)  In contrast, our recommendations require only changes in the bus schedule -- with results that are a huge improvement over the present service!
South Lee County --
1)  We agree with Tindale-Oliver (the 2020 TDP consultant) that the 240 and 600 Routes, connecting the Bell Tower with Coconut Pointe and Creekside Naples, should be conjoined.  This will result in better meets at the Bell Tower, Coconut Point and Creekside Naples.  Also, Bonita Springs will have hourly service instead of service every 90 minutes. 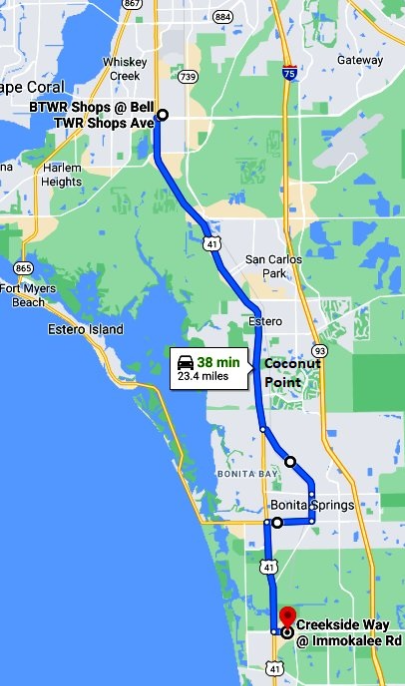 2)  We disagree with Tindale-Oliver that there should be two buses servicing Miromar Outlets from the Bell Tower. 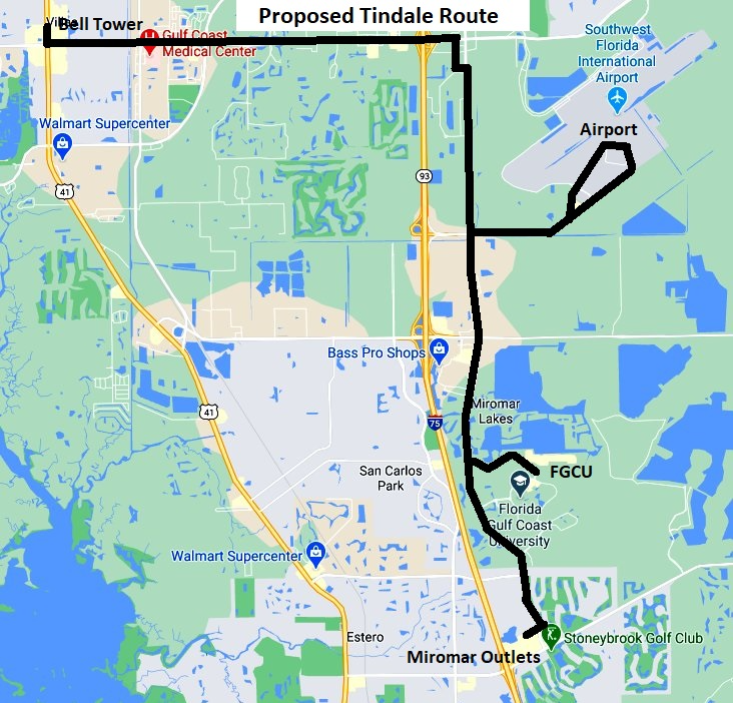 The problem is that this will cost the County a half-million dollars to run the extra bus, and it will not improve the transit times running to other parts of the county.  For example, from FGCU to Creekside, the proposed service falls well short of the standard set by the Pulse Plan: 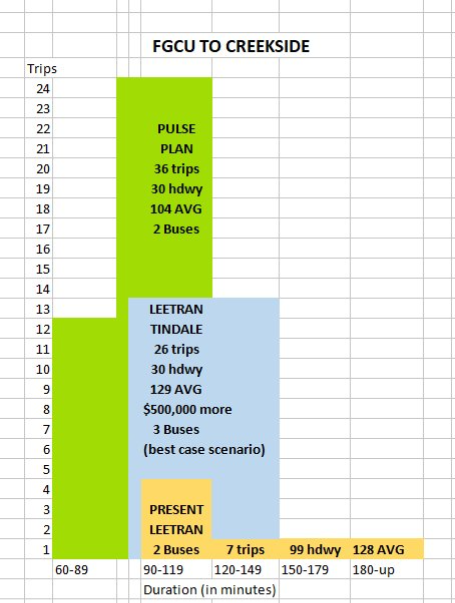 The light blue area in the above graph represents Tindale's "best case scenario" with regard to the Miromar bus meeting the 240/600 Bus at Bell Tower every hour (assuming a 60-minute circuit.)  If the circuit is going to be different than 60 minutes, this will result in longer overall travel times.  Moreover, this Miromar route will result in the two buses appearing at the Airport within 10 minutes of each other, going in opposite directions, causing confusion and redundancy.  It is simply not a good use of resources to have buses doing double duty (at too-close intervals) at the Southwest Florida Airport.  It is smarter to have a single bus meeting at the Airport every hour to meet with other buses going in three different directions (Lehigh Acres, Bell Tower and Naples) than having two buses appearing every 50 minutes at the Airport going in two different directions within minutes of each other, and having the southbound bus dead-ending at Miromar Outlets with nowhere to go except back to the Bell Tower!)  This is a fine example of LeeTran and Tindale concentrating on superficial frequency over and against an intelligent well-thought mobility.
3)  We can utilize FGCU's own West Lake Shuttle near Gulf Coast Town Center as an interface between the college and LeeTran services.  The Pulse Plan requires no change in how the West Lake Shuttle is presently run.  LeeTran will save 15 minutes every hour, and the FGCU students will have bus service available to them every 30 minutes, instead of every 85 minutes which is the case now.
4)  Having a place for the 250, 260 and 715 buses to interface at Homewood Suites Drive near the Hilton Garden Inn on Alico Road enables those buses to exchange passengers and save customers literal hours on their trips to and from Lehigh Acres!  LeeTran has gone on record saying that an express route every three hours to and from Lehigh Acres is unreasonable, since three hours is too long of a wait time between rides!  Instead, LeeTran offers the much more reasonable solution in having customers spend an extra four hours round-trip riding on a bus from Lehigh to Lover's Key and back!  Which is more reasonable then?  Planning to take a bus which arrives every three hours, or being forced to waste four hours actually riding on the bus?  LeeTran must think that it would be a great shame merely to wait for a bus, when or planing to take a bus when riding on the bus is so much more fun!
5)  The 130 route can be cut into two parts.  The part south of Gladiolus can become a new east-west route at Summerlin Square which transfers passengers to the Sanibel Outlets going westbound and to Lakes Park and Old Gladiolus Rd running eastbound. (Route 255)
Lehigh Acres --
6)  The 115 Route has
can be run in such a way where it can make its way on the Daniels Road Extension to Homewood Suites Drive to pick up and drop off passengers for the Airport, FGCU, GCTC, San Carlos Park and South Lee County every three hours.  These runs are considered to be "express runs."  They don't need to run every hour, unless demand warrants.  The Pulse Plan demonstrates that multiple hours can be saved for the passenger with this Daniels Road corridor link (for example, more than four hours can be saved on a round-trip between Lehigh and Lover's Key!)  LeeTran argues that it is "unreasonable" to provide services with a three-hour wait time, but LeeTran's solution is not to provide the service at all, and then to force passengers to ride an extra four hours on a bus to their destination.  (Present LeeTran round-trip service between Lehigh and Lover's Key, for example, averages 7.5 hours round trip.  With the Pulse Plan's express route that time is 3.5 hours.)
7)  It is also possible that the 715 Route can be run in a way where there are not only express runs, but also extended coverage runs covering less populated areas of Lehigh.  This can be done not by adding an extra bus, but by simply utilizing the 715 Bus as a multi-purpose bus (as the schedule below illustrates:) 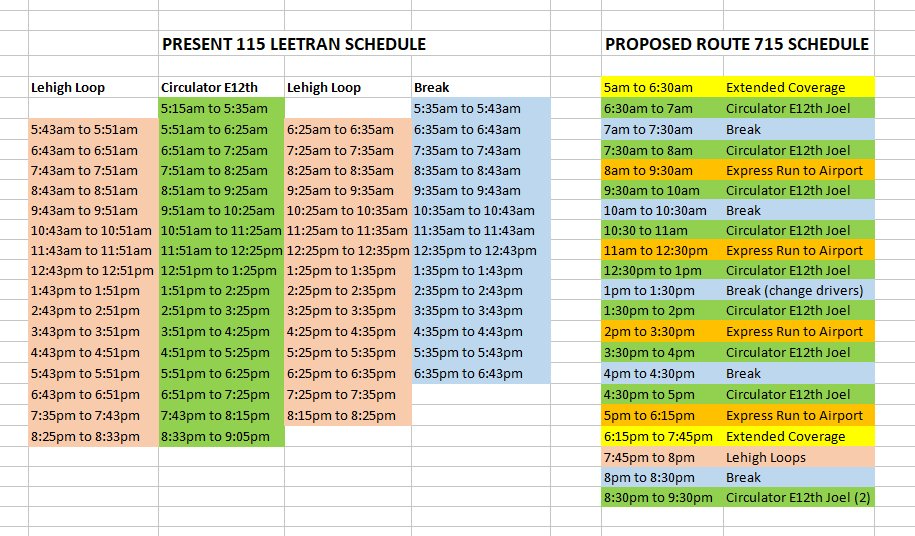 At present, the 115 is used only as a circulator route, running dutifully every hour up and down Joel Blvd.  However it unnecessarily covers the "Lehigh Loop" area twice every hour.  That time can be better used to offer service to the Airport for Lehigh patrons.  During the time that the 715 is at the Airport, the 710 Bus is able to cover the E 12th service, so there is no interruption in the Joel Blvd service.  This is better than terminating the 115 Route and offering only microtransit service in its place, since the idea is to offer a better utilization of the 115 Route, not to replace it with an inferior service.  (Fixed-route is always more efficient than microtransit.) 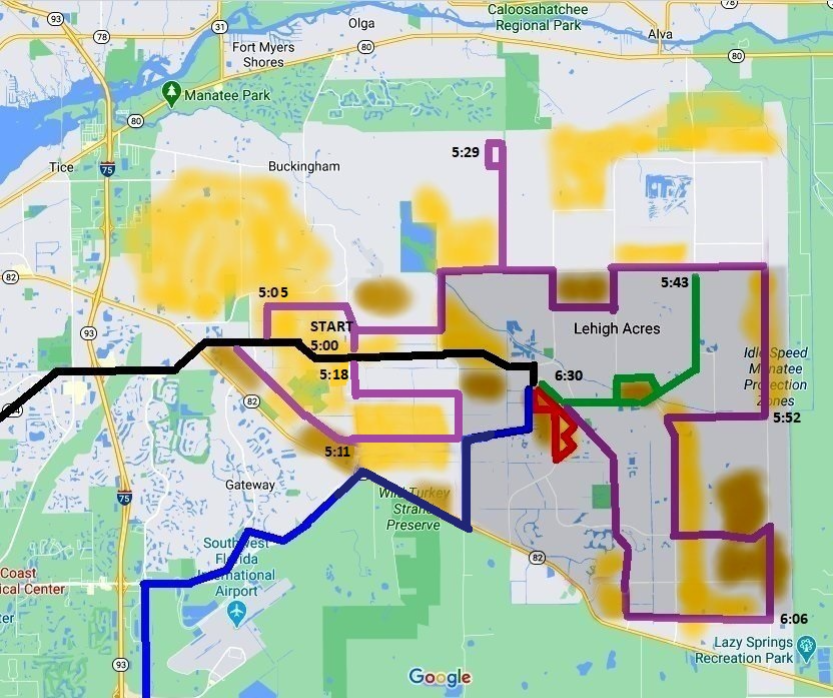 In the map above, the black route is the 710 Bus, the green route is the E 12th Circulator path, the red route is the "Lehigh Loops" area, the purple route is the "extended coverage" part of the 715 route.  With regard to the gold and bronze blotches on the map, this refers to lower-income households, with the dark bronze as being a bit higher in low-income household density than the gold.  This area can be run as a "deviated fixed-route," meaning that it can deviate just a bit, or pass over areas that have no demand.  This is where Mobility-on-Demand can actually work, because it helps the driver to pick up and drop off his passengers during a narrow window of opportunity [5am to 6:30am in the morning and 6:15pm to 7:45 in the evening] providing service to those needing to get to work and coming back home from work.
Cape Coral --
8)  We can make all routes in Cape Coral of the same headway (in multiples of 60 minutes,) so that they can meet together with each other all day long on Cape Coral Parkway and at the Cape Coral Hospital.   At or near the Cape Coral Hospital is the ideal location for North Cape Coral bus transfers because it is the midpoint of the 320, 340 and 370 Bus Routes.
9)  The 595 Bus  can interface with the 340 and 370 Buses on North Del Prado, Hancock Bridge Parkway and Pondella Road to provide maximum integration and flexibility between North Fort Myers and Cape Coral.
Edison Mall --
10)  We can make the "5" Route [105 Route] into a 60-minute route instead of an 80-minute route where it can interface with the Lehigh Acres route on Colonial and the Forum and also shuttle passengers back and forth at Michigan and Marsh.  Customers can save up to two hours traveling between Lehigh Acres and Palm Beach Boulevard!
11)  We can make the 320 Route into a 20-minute express route to the Cape Coral Hospital, running from the Edison Mall hourly instead of at an 80-minute headway to Cape Coral Transfer Center and Coralwood Mall.
12)  We can transform the 180 [80] Route into a 60-minute route instead of 97-minute route, fully integrating it into the Bell Tower schedules by having it meet with the 250 Bus (both eastbound and westbound) off Daniels Road twice every hour.
13)  The 140 Route can be standardized from a 125-minute route into a 120-minute route so that meets at major transfer hubs will be at the same minute and hour throughout the day.  We can use the 340 Route to provide an extra circuit to the 140 schedule during the day so that drivers will have adequate recovery time at Merchant's Crossing.
14)  We can make the 130 Route into a single-bus hourly route instead of a double-bus two-hour route.  The extra bus can be used to service Summerlin at San Carlos as the 255 Route.
Rosa Parks --
15)  We want to eliminate Route 20 as it presently exists.  We can restructure that route so that it services Shoemaker and Edison Avenues on an hourly basis instead of every 80 minutes as is the case now.
16)  We can have the Riverdale route come through Marsh and MLK, instead of down through Palm Beach and it will still have enough time to service W. First St. every hour as well.  (See Route 95)
17)  We can have the "101 Route" take over the Metro-Broadway loop from the Old 80 Route and provide service along Fowler Street as well as the apartments at Winkler and Metro hourly.
18)  From one of the buses of the eliminated 20 Route, we can create a Palm Beach express route interfacing with the 95 [100] Bus at the Eastside Shopping Center every half-hour [Route 25.]  This route could take the place of the Downtown Trolley, saving the expense of running an extra bus.
Michigan-Marsh --
19)  We should look into building a sizeable shelter for patrons to wait for their connecting buses at Michigan and Marsh, as this will become a major hub for bus transfers between the 15, 20, 95 and 105 buses.  It is advantageous to create multiple hubs so that passengers can save on their travel times and have the most flexibility in how they take their bus.  Building up Rosa Parks is not the right strategy since it concentrates bus flow at one location and it creates over-crowding and poorer service.
LeeTran has said that they proposed to enhance their "trunk and feeder" system by running more buses along the main trunk line -- this is absolutely the wrong strategy.
Merchant's Crossing --
20)  We can have both the 590 and 595 Bus arrrive at the VA Hospital in Cape Coral.  The 590 will return to Merchant's Crossing where passengers will either board the 140 Bus South, or continue on into Suncoast Estates, and the 595 Bus will enter into Cape Coral where it will drop off its passengers to the 340 Bus at NE 3rd St.  By having both buses access the VA Hospital, it will prevent one bus waiting for the other to return to Merchant's Crossing and it will provide more efficient operation for both routes.
Next --->