By efficiency we mean both:  1) how quickly (duration) and how often (headway) a passenger can be moved from point A to Point B, and also 2) how well one makes use of one's own resources in getting the most from one's transit system.

The 60 Route in San Carlos Park operates every 85 minutes.  On every run the driver takes a break for twenty minutes.  Thus, only 65 minutes are actually devoted to moving passengers every trip, with 20 minutes of idle time resulting in about 30% inactivity every trip.  (Most routes have 10-13% of a route devoted to driver recovery time.)  In addition, 15 minutes are spent running between San Carlos Marketplace and Three Oaks Parkway, and another 10 minutes used to run between Ben Hill Griffin Parkway and FGCU.   If we could divest the route of these extra runs and excessive driver break times, we could transform an inefficient 85-minute route into a "core route" of about 33 minutes.  Here are how the mathematics between the two routes break down:

Of course, not every loop on the new 260 Route is equal -- some loops are longer and other are shorter depending on what course the bus is traveling (all bus loops are between 34 and 40 minutes.)  By streamlining the route, we can increase the frequency with which the 60 Bus meets with the 240 Bus from 12 times a day to 21 times a day.  Not only that, but the 60 Bus is also able to meet with the 50 Bus twice every three hours and with the 115 Bus once every three hours at the Hilton Hotel on Alico Road -- without adding any additional buses --- simply by aligning schedules! 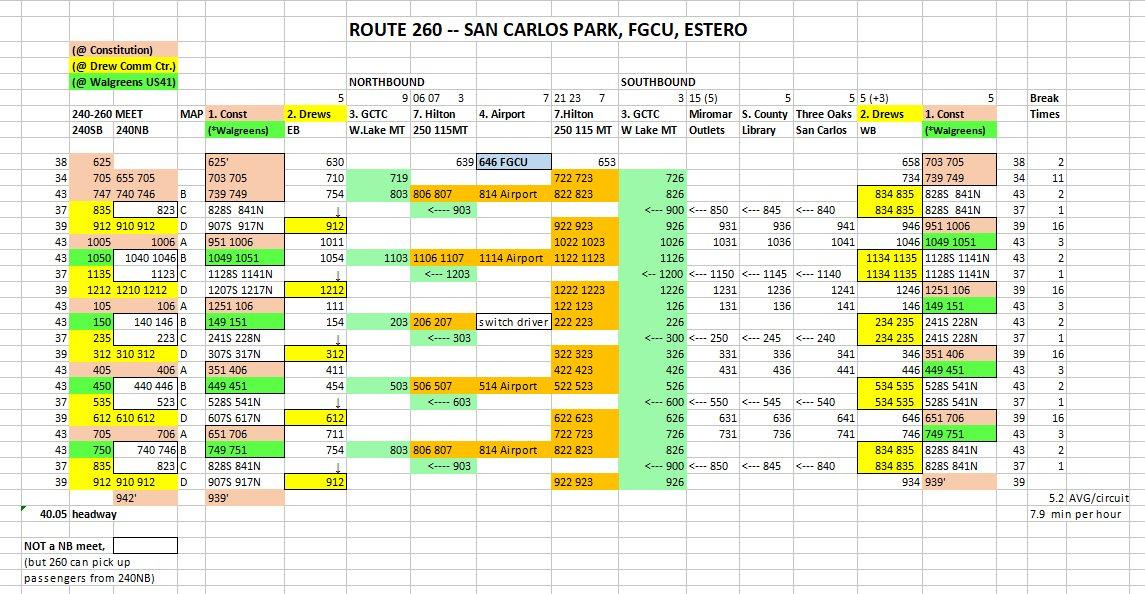 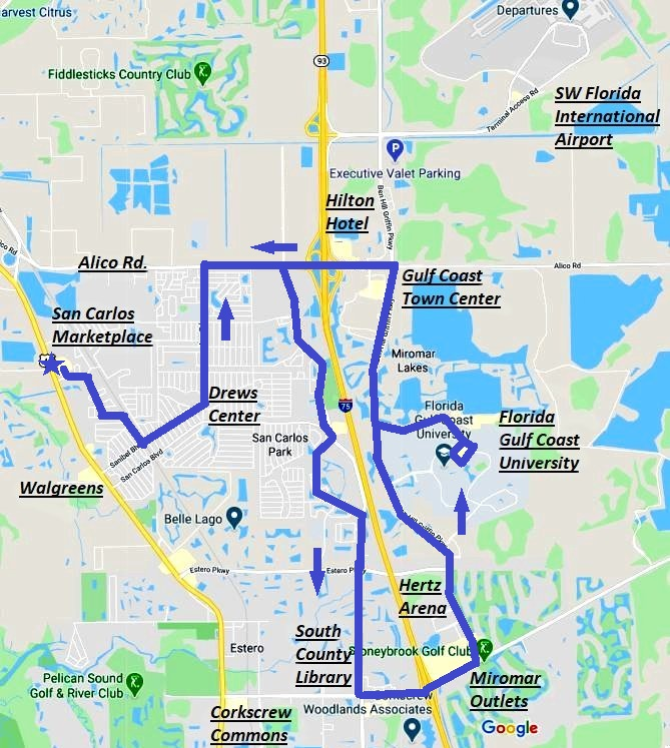 The parts of the route which can be divested from the "main loop" (in blue) are indicated by red lines in the graphic below (segment times are indicated by a number with a circle around it:) 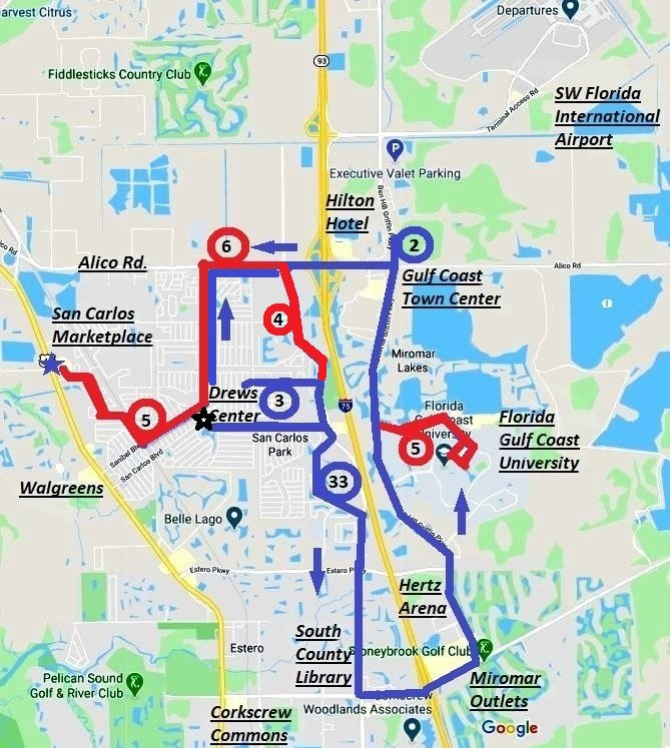 The Pulse Plan actually transforms the 260 Route from a single-loop route of 85 minutes into a double-loop route running every 45 minutes.  Here are how each of the 260 Bus's 40-minute trips run on this map:

Note that on every trip, the 260 Bus stops at the Hilton Hotel and Gulf Coast Town Center.  One of the four trips is an excursion to the SW Florida International Airport.  This is to give the 250 Bus a 15-minute recovery stop at the Hilton Hotel, (close to a Seven-Eleven an an Arby's Restaurant.)  When passengers return from the Airport, they can either head west to the Bell Tower and Summerlin Square, south towards Bonita Springs and Naples or North to Lehigh Acres.  Aligning the 260 Route in this fashion decreases the headway in San Carlos Park from a nominal 85 minutes into 60 minutes at the Miromar Outlets and South County Library, to 45 minutes at FGCU and Drews Community Center, and for passengers at FGCU, headway to the Bell Tower is only 37 minutes.  Every single time a 240 Bus approaches San Carlos Park, the 260 Bus is there to pick up those passengers within ten minutes of that drop off.
To see how this new configuration of the 60 Route affects arrivals and departures at FGCU, please refer to the page FGCU.  To see how the route functions in connection with other routes in the area, please refer to the South County Animation.
Next ---> Coverage