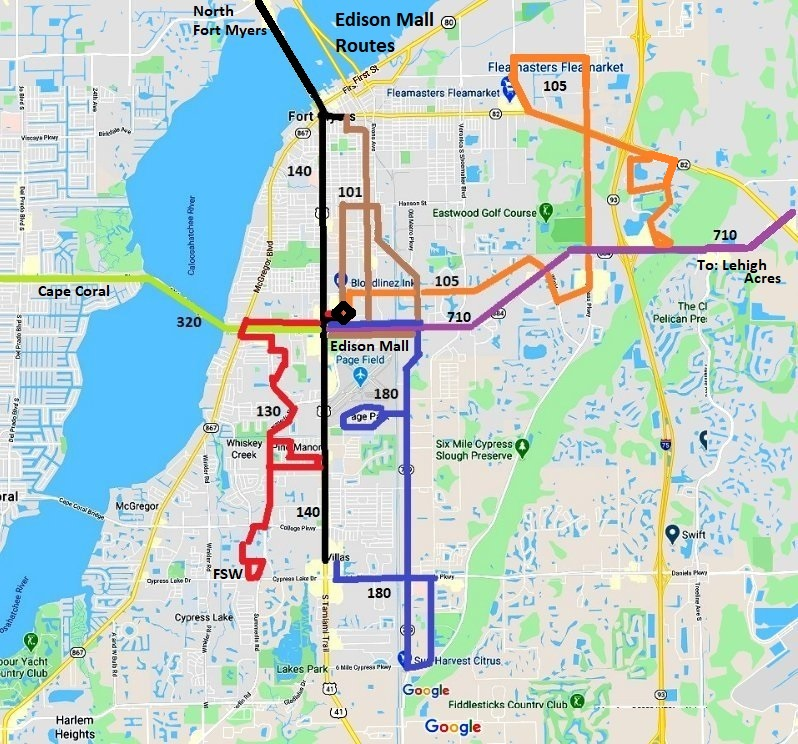 The Edison Mall is the nexus for routes servicing central Fort Myers, and it is also the midpoint between the Lehigh Acres and Cape Coral routes.  It includes the:

101 Route -- (tan route) which makes an hourly loop on Metro from Colonial to Hanson, passing by the Westwood and Westchase Apartments on the way to LeeTran headquarters.  It then returns up on Broadway to the Edison Mall, where it always arrives in time to interface with the Cape Coral, Lehigh Acres and Summerlin Road routes.  Moreover, whenever the 105 and 180 Routes pull into the Edison Mall, the 101 Route is there to meet them!  On the 101's second trip, its travels north on Fowler Street to Rosa Parks Transfer Center.

105 Route -- (orange route) travels east along the college route, passing Keiser University and Hodges University.  Additionally it passes by a number of apartments on Winkler Road and at the Forum.  The headway on this route is changed from 80 minutes to 90 minutes, and the extra ten minutes are used to interface with the Rosa Park routes at Michigan and Marsh, near Fleamaster's Flea Market.  The 105 also interfaces with the 710 Route to Lehigh at critical junctures along Colonial Boulevard to provide short-cuts for passengers traveling between Palm Beach and Lee Boulevard, as well as to the Wal-Mart on Colonial.

130 Route -- (red route) travels up Summerlin Road to Pine Manor and Florida Southwestern College.  It used to have two buses traveling to Summerlin Square, but that double-tracked with the 50 Route which was traveling along the same way.  Now, more efficiently, the 130 simply drops off its passengers going to Summerlin Square with the 250 Bus at the Martinique Apartments on Cypress Lake Drive every hour.

140 Route -- (black route) is the backbone of the Lee County system.  The only change to the 140 has been to change its 20.83 minute headway into 20 minutes.  Additionally, it is designed to have the greatest number of meets all along its route at all the major hubs.

180 Route -- (blue route) travels down Metro Parkway southward to Page Park, Gulf Coast Medical Center and South Fort Myers High School.  The Metro Route has been notorious for its lack of connectivity because its headway of 97 minutes defies all attempts to synchronize it with any other route!  The Pulse Plan has changed this headway to 90 minutes, which succeeds in lining it up with all the other routes at the Edison Mall and Bell Tower.

Two other routes meet together every hour at the Edison Mall -- Route 320 and Route 710. They provide seamless east-west transfers from Cape Coral to Lehigh Acres and back!