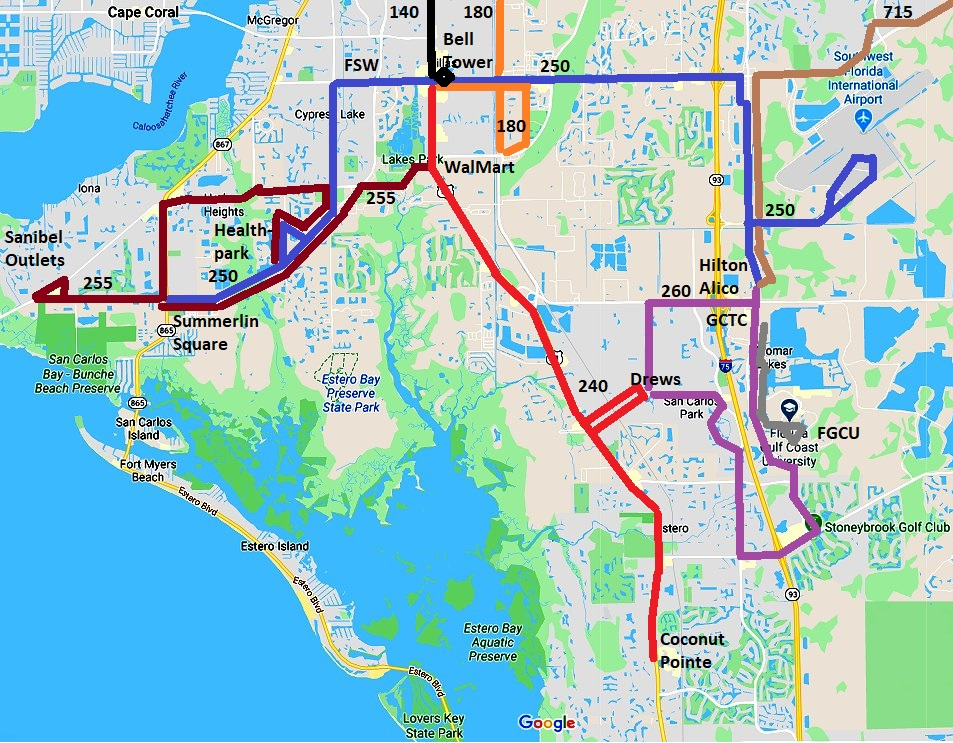 The Bell Tower is the nexus for South Fort Myers, acting as the focal point between the Airport and Beach going east and west, and between Fort Myers and southern Lee County going north and south.  Looking at the map, one gets a real insight into how many routes can cooperate to meet up with each other.  Passengers should be able to maneuver from one route to another in an expeditious manner, and with the Pulse Plan, they are able to do so.   We have the:

240 Route -- which meets the 140 Bus every time it comes into the Bell Tower.  Presently, the 240 has an 85-minute headway, which puts it off-kilter with other routes.  The Pulse Plan adds five minutes to the route to make it synchronous with the 600 Route coming into Coconut Pointe.  The extra time also allows the 240 to meet with the 260 Route at Drews Community Center, a short three-minute dodge off US 41, allowing the 260 Bus to run double-loops instead of single loops in San Carlos Park.  The 240 runs on a 40-40-40-60-minute schedule, instead of a 45-45-45-45-minute schedule to allow it to interface more easily with all the sixty-minute routes at the Bell Tower.  Half the time there is an exact meet, and for the other times, the 240 Bus appears within 21 minutes.

250 Route -- This route is the main east-west route in South Fort Myers.  It services both the SW Florida International Airport and Summerlin Square every hour.  At present, the 250 has a headway of 67.5 minutes (with two buses running at 135 minutes apiece.)  By removing the excursion to Sanibel Outlets (eliminating eight minutes,) and then having the 260 Bus cover every third trip to the International Airport, the 250 has enough recovery time to run adequately throughout the entire day.  Both east and west 250 Buses meet with the Cape Coral 330 Bus at the Bell Tower at the same time, providing seamless transfer of passengers from Cape Coral to the Airport and the Beaches and back.

255 Route -- The 255 is the "Iona Circulator."  It moves passengers east and west from Sanibel Outlets to Summerlin Square, via San Carlos Boulevard and Gladiolus Drive to Healthpark Hospital and finally to Lakes Park and Old Gladiolus Road.  This route never stops at the Beach Park and Ride, but it interfaces with the Beach Trolley and the 250 Route at San Carlos Boulevard and Summerlin Road.  It is designed to pick up and drop off passengers to and from the Beach on its way to and from Sanibel Outlets.  It also services Healthpark Hospital where a bus appears, on average, in both directions (east and west) every thirty minutes.  At Old Gladiolus, passengers have access to the 240 southbound to San Carlos Park and Coconut Pointe on every opportunity.

260 Route -- The 260 Route is the "San Carlos Park Circulator."  But it is also the primary transit provider for FGCU, too.  With both 240 Buses coming to San Carlos Park from both directions every 40-45 minutes, it makes sense to have the 260 meet those buses at every opportunity, which doubles service in and out FGCU and also to San Carlos Park.  In fact, outbound service from FGCU to the Bell Tower increases from 12 to 30 times a day (with only a half-hour headway using the University's own Shuttle System!)

Other routes that interface at the Bell Tower are the 330 Cape Coral route, the 180 Metro Route and the 140 Trunk Route. 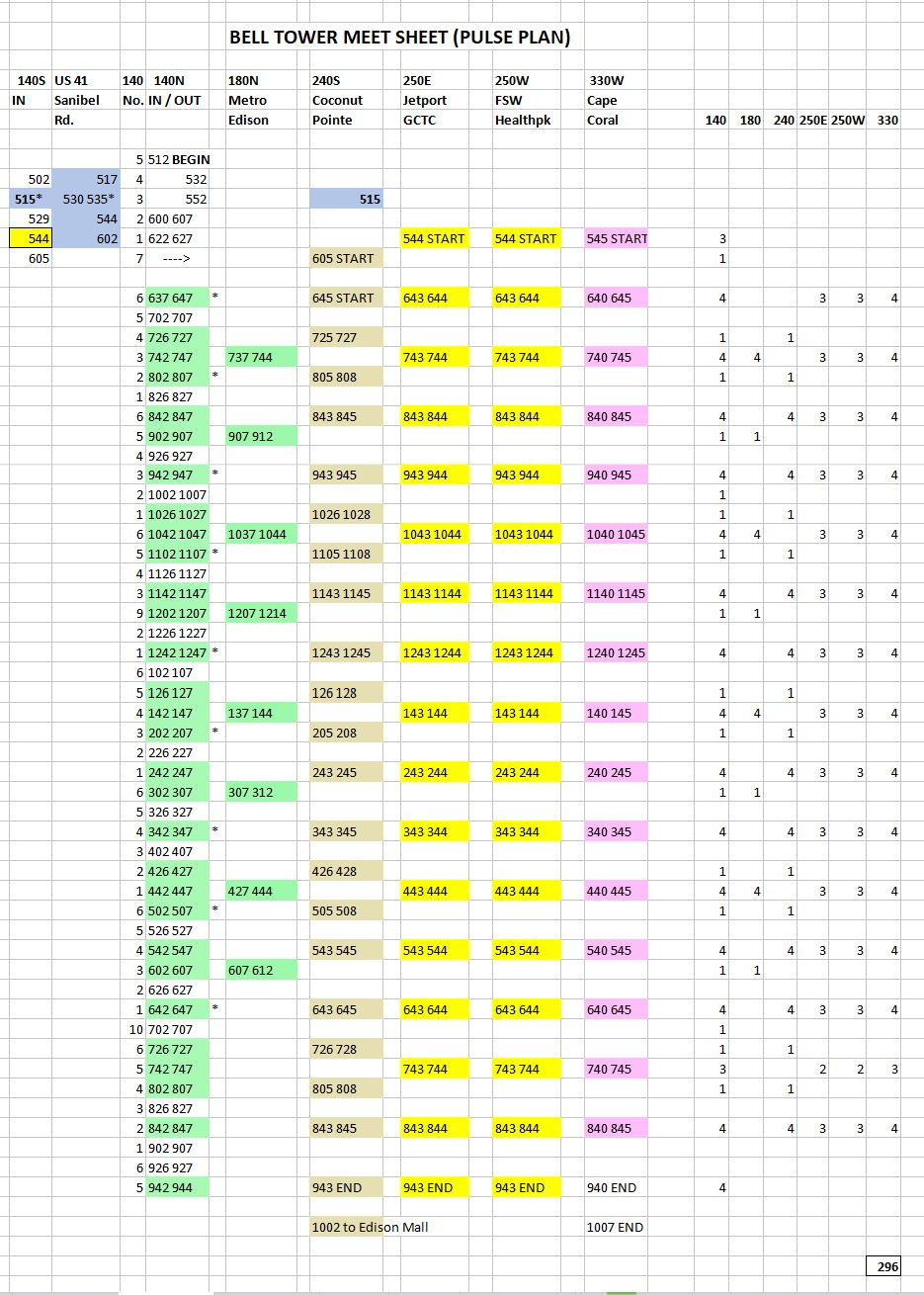